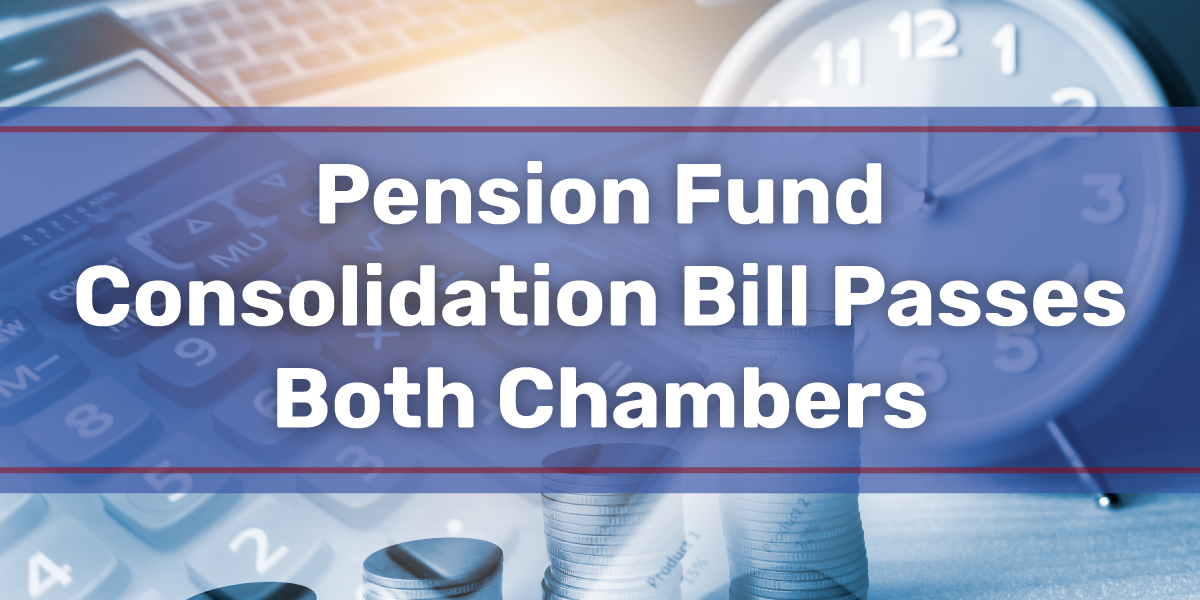 Despite a whirlwind of drama in the final hours leading up to the Senate’s vote, a pension consolidation bill passed both chambers of the General Assembly this week which awaits Governor J.B. Pritzker’s signature before formally becoming law.  The Senate’s 42-12 vote in favor of consolidation followed the House’s 96-14 vote on Wednesday.

The main accomplishment of this bill will be the consolidation of approximately 650 downstate and suburban police and fire pension funds into two separate funds, which had previously been touted by the Governor as a top priority .  One of these funds will be designated for the police pensions and the other for the firefighter pensions.  Most notably, this consolidation will be for investment purposes only, and the administration of the funds by the local pension boards will remain unchanged.  One major shift from the originally proposal is that under the current bill, active and retired first responders will have majority representation on the board overseeing the funds. This amendment was added late last week and helped to secure the support of the Illinois Fraternal Order of Police, which had previously opposed this bill.

A task force which had previously been assembled by Governor Pritzker concluded that it would generate an additional $820 million to $2.5 billion over the next five years, and $3.6 billion to $12.7 billion over 20 years. If these estimates are accurate, this would reduce pressure on taxpayer contributions, given that a portion of the local systems are generally funded utilizing property taxes.

As is typical with most significant legislation, this process was not without drama.  A provision had been inserted into the bill late in the process which would have prevented local municipalities from intervening in the pension applications of first responders in an attempt to dispute their entitlement to benefits.  This provision would have had enormous implications not just for the disability application process, but for the applicant’s potential eligibility for benefits under the Public Safety Employee Benefits Act (PSEBA).  As a result of this added provision, the Illinois Municipal League, a powerful lobbying association for the government sector, withdrew its support for the bill.  However, this provision was removed from the final bill, causing the Illinois Municipal League to once again support the bill.

Another significant, albeit less reported, provision of this bill is an increase in Tier 2 pension benefits.  It has been widely reported that the current system of benefits for Tier 2 workers is too low to remain in compliance with federal Social Security guidelines.  In an effort to curb this issue, the bill amends the language of the code to change the averaging period for Tier 2 workers (hired 2011 and later) from 8 years to 4 years, and modifies the pensionable pay cap increase rate.  These changes will mean an increase in benefits for Tier 2 workers.

The content of this blog is intended for informational purposes only and does constitute or establish an attorney-client relationship, nor constitute legal advice. If you wish to discuss any further aspect of the material contained herein, please contact Brent Eames at Eames Law Group, Ltd..

Is somebody watching me? A guide to surveillance in work comp cases.

Technology seems to be advancing on a daily basis across the country.  Whether it’s higher powered cameras or GPS tracking technology, it is becoming nearly impossible for people to stay completely off the grid.   It should come as no surprise that when big dollars...