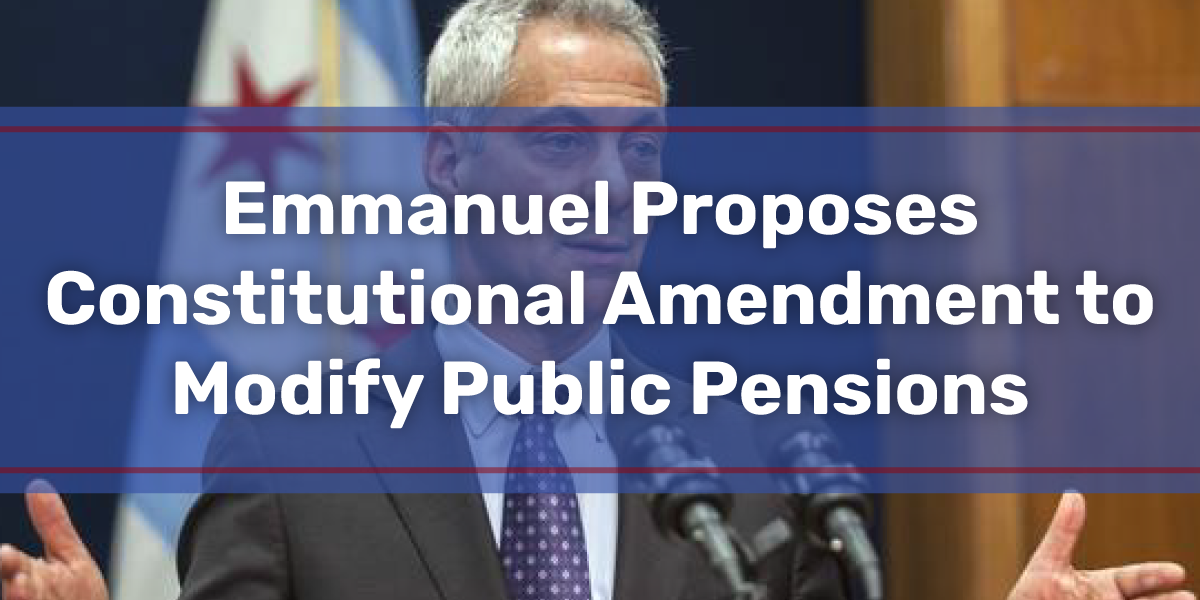 This week, Chicago Mayor Rahm Emmanuel set forth what has been described as a progressive agenda to address the city’s growing public pension crisis.  Included in his proposal were recommendations for new sources of revenue for the city, including the legalization of recreational marijuana, and the construction of a casino in Chicago.  Also included was the proposal for an amendment to the Constitution of the State of Illinois in an effort to curb annual cost of living increases for pensioners.

According to excerpts of his speech released by his office, Emmanuel is attempting to challenge and modify the requirement of the 3% annual compounded pay increase afforded to pensioners, including police officers and firefighters. According to Emmanuel: “What kind of progressive, sustainable system guarantees retirees 3 percent annual compounded pay increases when inflation has been at basically zero and current employees have, at times, been furloughed, laid off or received 1 percent raises?” Emmanuel is prepared to argue that, “amending the state constitution to allow for both a progressive income tax and new agreements with labor is an important step towards fiscal stability and progressivity.”

“Membership in any pension or retirement system of the State, any unit of local government or school district, or any agency or instrumentality thereof, shall be an enforceable contractual relationship, the benefits of which shall not be diminished or impaired.”

Historically, this constitutional provision has provided the ultimate safeguard for pensioners whenever their rights and benefits have been threatened.  In fact, as recently as 2015, the Supreme Court unanimously struck down a 2013 state law that changed the Illinois Pension Code and lowered retirement benefits for the members of all state pension systems. In striking down the law, the Supreme Court held that the Pension Protection Clause mandates that the authority of the legislature does not include the power to diminish or impair the benefits of membership in a public retirement system.  So, this is why Emmanuel is proposing the constitutional amendment, as this would be the only avenue to lower pensioner benefits, including the contracted cost-of-living increases.

At this point, it is not clear what any proposed amendment to the Constitution would look like.  Presumably, the scope of the proposed amendment would go far beyond simply addressing the annual cost-of-living increases.  Removing the Pension Protection Clause would take away a public employee’s greatest defense for any attacks on their retirement benefits and well-being.  This is a development which must be monitored closely.