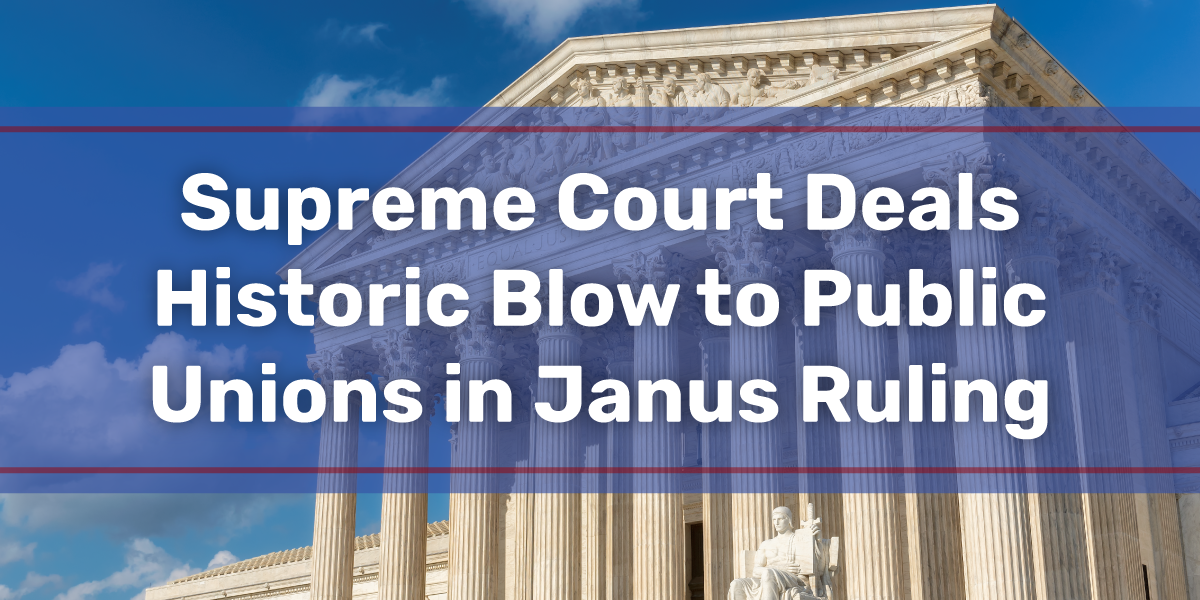 After years of arguments, appeals, and political drama, including the surprising death of Justice Antonin Scalia; the refusal of a Republican Senate to allow President Barack Obama to appoint a Supreme Court Justice; President Donald Trump’s 2016 Presidential victory; and President’s Trump’s subsequent appointment of conservative Justice Neil Gorsuch to the highest court, the Supreme Court finally issued its ruling today to answer the question of whether full-fledged public employees can legally be required to pay fair-share union dues to support the unions which collectively bargain on their behalf.  Unfortunately, as expected, the Supreme Court dealt a crushing blow to organized labor in Illinois, and across the Country.  In a 5-4 decision which was split along ideological lines, the Supreme Court ruled in favor of Petitioner, Mark Janus, holding that being forced to pay union dues to a public union violates the First Amendment.  The majority’s reasoning was based in the argument that public employees are required to provide financial support for a union that, “takes many positions during collective bargaining that have powerful political and civic consequences,” thereby infringing upon guarantees of freedom of speech and freedom of association.  Per today’s ruling, public employees will now be able to opt out of paying any union dues, but still reap the benefits which the unions provide.

Compulsory union dues, or so-called fair-share fees, ensure that workers cannot freeload off the union and the benefits it provides without sharing in the costs. These benefits include issues such as better working conditions and higher wages, which are negotiated by the union.  Of course, the inevitable loss of income from the loss of these fair-share payments would hurt the ability of the unions to fight for their members, and would potentially cripple their political power and lobbying efforts.  At its core, that is precisely what this case is really all about.  Upon learning of the Supreme Court’s decision, President Trump admitted as much on his Twitter account, celebrating what he described as a, “big loss for the coffers of the Democrats.”

The Supreme Court’s opinion today was unfortunately even more anti-union than many scholars and observers expected. This decision required, for the first time, that union membership for new public employees be “opt-in” rather than opt-out.  Moving forward, neither an agency fee nor any other pay­ment to the union may be deducted from a nonmember’s wages, nor may any other attempt be made to collect such a payment, unless the employee affirmatively consents to pay. According to the majority’s opinion, “by agreeing to pay, nonmembers are waiving their First Amendment rights, and such a waiver cannot be presumed.”

In making this ruling today, it is important to note that the Supreme Court overturned a 41-year-old precedent.  This was discussed in detail by dissenting Justice Elena Kagan:  “There is no sugarcoating today’s opinion. The majority overthrows a decision entrenched in this Nation’s law— and in its economic life—for over 40 years. As a result, it prevents the American people, acting through their state and local officials, from making important choices about workplace governance. And it does so by weaponizing the First Amendment, in a way that unleashes judges, now and in the future, to intervene in economic and regulatory policy.”

Today marks a new chapter for public sector unions across Illinois and the United States as a whole.  It remains undecided what impact this ruling will have on organized labor in Illinois, but it certainly has created an uphill battle for unions to serve their proper function of protecting their members and standing up for workers’ rights.

The case is JANUS v. AMERICAN FEDERATION OF STATE, COUNTY, AND MUNICIPAL EMPLOYEES, COUNCIL 31, ET AL.  The content of this blog is intended for informational purposes only and does constitute or establish an attorney-client relationship, nor constitute legal advice. If you wish to discuss any further aspect of the material contained herein, please contact Brent Eames at Eames Law Group, Ltd.