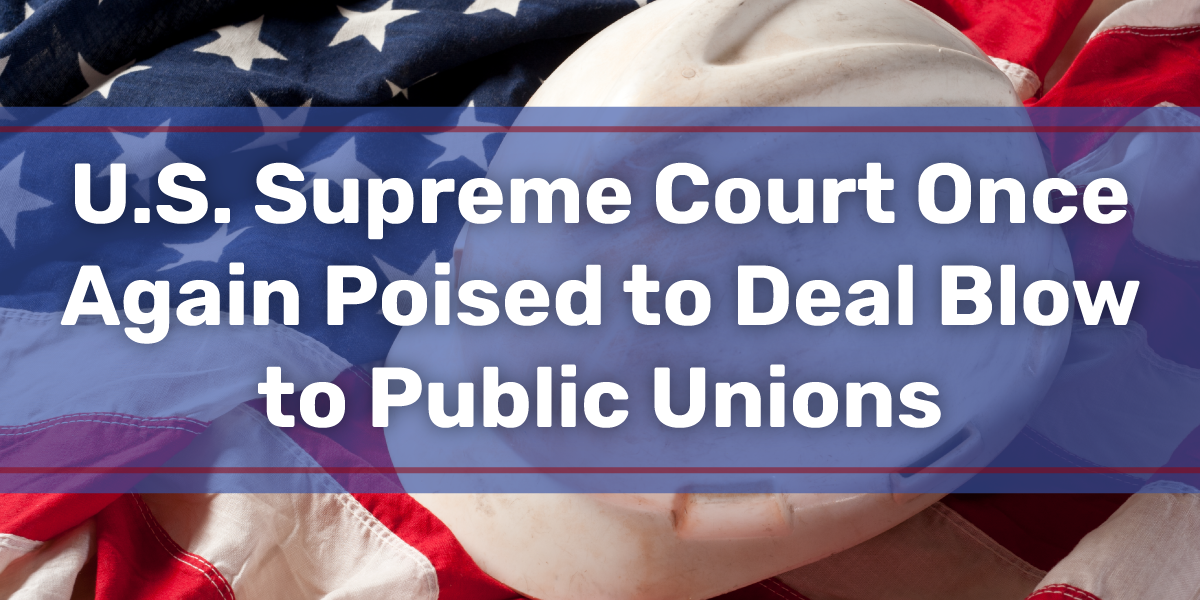 In the latest chapter in the decades-long battle by conservative groups aimed at weakening the political power of organized labor, the United States Supreme Court announced it will hear Janus v. AFSCME, a case that once again challenges the constitutionality of compulsory union dues for public employees. This is the third time the Supreme Court has considered the issue of compulsory union dues in as many years.

Compulsory union dues, or so-called fair-share fees, ensure that workers cannot freeload off the union and the benefits it provides without sharing in the costs. These benefits include issues such as better working conditions and higher wages, which are negotiated by the union. However, critics of these fair-share provisions argue that they infringe on a worker’s constitutional rights. Mark Janus, an Illinois resident and employee of the Illinois Department of Healthcare and Family Services, is the lead Plaintiff in the case. He challenged the legality of being forced to pay union dues to his public union, arguing that the First Amendment guarantees freedom of speech and freedom of association, and he does not want to be forced to associate with his union by paying money to support its agenda.

Governor Rauner, who has fought these fair-share provisions for years, has applauded the challenge and the Supreme Court’s decision to hear the case, indicating in a statement that, “no person should be forced to give up a portion of their pay each month to fund public sector union activity against their will”. Of course, the inevitable loss of income from the loss of these fair-share payments would hurt the ability of the unions to fight for their members, and would potentially cripple their political power and lobbying efforts.

Prior to the untimely passing of Justice Antonin Scalia, the Supreme Court seemed primed last year to strike down the constitutionality of the fair-share dues. The Supreme Court heard arguments in the case of Friedrichs v California Teachers Association, which presented the identical issue as in the Janus case. Before Justice Scalia’s passing, many legal scholars thought the Court was set to rule that the fair-share dues were unconstitutional. However, the passing of Justice Scalia left the court with only eight justices left to make a ruling. This resulted in a 4-4 deadlocked decision from the Supreme Court which failed to hold any precedential value. Now that newly appointed Justice Neil Gorsuch has taken Justice Scalia’s place, conservative groups have doubled down on their efforts and legal scholars once again expect a decision striking down compulsory union dues. This is a case to follow closely for all public employees.