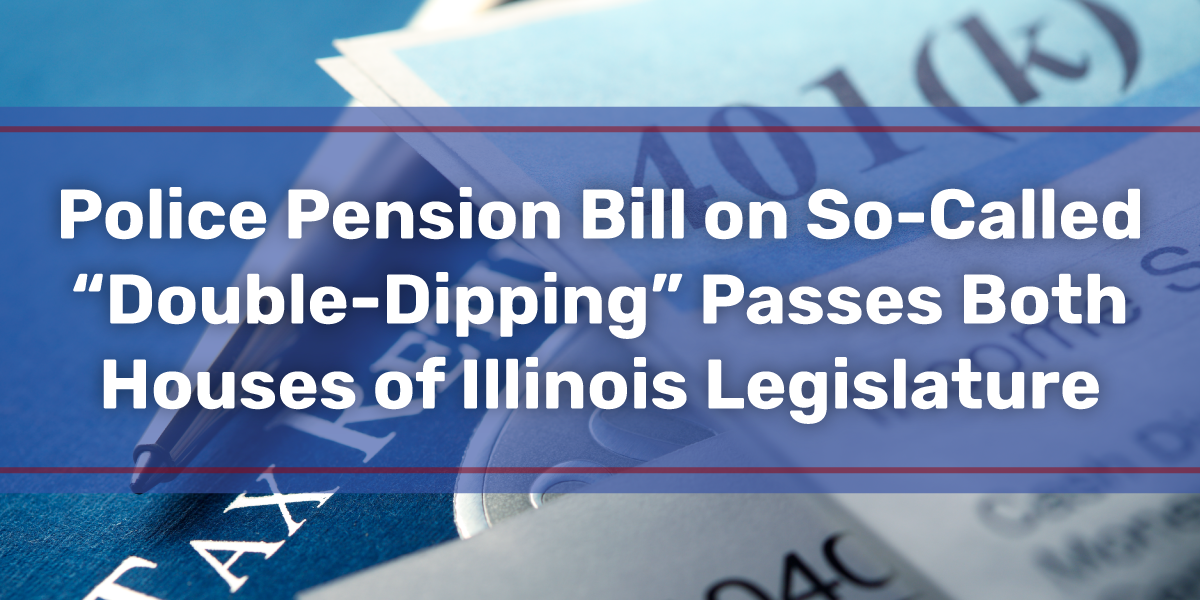 A bill which seeks to prevent retired police officers from so-called “double-dipping” on pension benefits has recently passed both houses of the Illinois legislature. (May 29, 2017). This bill was inspired by Naperville Police Chief, Robert Marshall, who retired as a police officer after 30 years of service and began collecting his retirement pension. Subsequently, Marshall became the Police Chief and elected to collect his retirement pension and his salary simultaneously while also contributing to the Illinois Municipal Retirement Fund (“IMRF”). Not long after Marshall began as Police Chief, the Illinois Department of Insurance filed a statement that Marshall’s police pension should be suspended in light of his position as Police Chief. However, the Naperville Police Pension Board voted in favor of Marshall to receive both his salary and pension. Afterwards, the state filed a claim in DuPage County Court which also ruled in Marshall’s favor. An appeal made by the State to the Illinois 2nd District Court of Appeals was dismissed.

After the decisions of the courts, Republican representative, Grant Wehrli, sponsored a bill in the House on January 12, 2017. After committee deliberation and a few amendments, the bill passed the House on April 27, and then the Senate on May 29. Wehrli asserts that the bill is designed to close a loophole that is costing Illinois taxpayers money. If Governor Rauner signs this bill as expected, it will effectively prevent retired law enforcement officers who accept new active duty positions from obtaining a second pension through a police-fund or the IMRF. Instead, they will be permitted to enroll in a 401K style defined contribution plan. There is also language in the bill that sets specifications for such defined contribution plans including immediate vesting and minimum IRC requirements. Finally, this bill provides that if a retired law enforcement officer who is receiving pension payments accepts a new active duty position, “the pension payment shall be suspended while he or she is in service,” and that “pension payments shall be resumed [when he or she again retires].” IL HB0418.

Thank you to Ryan McGuire for his assistance with this article. The content of this blog is intended for informational purposes only and does constitute or establish an attorney-client relationship, nor constitute legal advice. If you wish to discuss any further aspect of the material contained herein, please contact Brent Eames at Eames Law Group, Ltd.