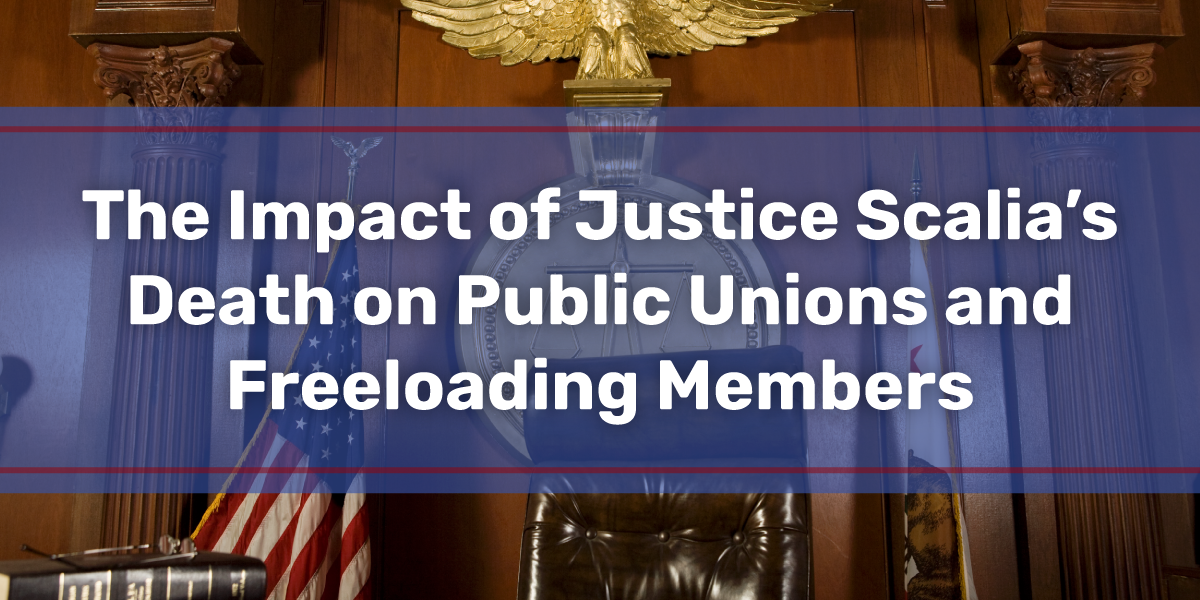 Conservative icon, Justice Antonin Scalia, passed away this month. Appointed by President Ronald Regan, Justice Scalia sat on the United States Supreme Court from 1986 until his death on February 13, 2016. With few exceptions, his rulings were reflective of his staunch conservative values in his interpretation of the law and the Constitution. Immediately upon his death, senators on both sides of the aisle engaged in a war of words regarding Justice Scalia’s successor, with Democrats pushing President Obama to name his replacement as soon as possible while Republicans threatened to delay the process until President Obama is out of office. Much has been written about the potential impact of Justice Scalia’s replacement on the future of jurisprudence in this country, but his passing could have an immediate and resounding impact on public unions.

Previously, we wrote about the Supreme Court’s decision in Harris v Quinn. In a 5-4 decision, with Justice Scalia siding with the majority, the Supreme Court ruled in Harris that it is unconstitutional for union members who are “partial public employees” to be required to pay fees to the public sector unions that represent them. In so ruling, the Court did not address the constitutionality of compulsory union dues for “full-fledged public employees”, which would include police officers, firefighters and teachers. However, the rationale of the decision, which was based in First Amendment freedom of speech grounds, certainly seemed to suggest that if confronted with the same question for full-fledged public employees, the Supreme Court would also strike down the practice of allowing public unions to compel the payment of union dues. As a consequence, the door would be opened for freeloading union members and the political power of unions across the country would be tremendously weakened.

Fast forward to January 11, 2016 when Justice Scalia and the rest of the Supreme Court heard arguments on the case of Friedrichs v California Teachers Association. In Friedrichs, the Court is faced with the question of whether it is constitutional for a teacher in California, a full-fledged public employee, to be required to pay union dues in order to work there as a teacher. The attorneys in Friedrichs are advancing the same arguments that were entertained in Harris, and prior to Justice Scalia’s death, the United States Supreme Court seemed primed to officially deal a crippling blow to public unions all across the country by striking down the compulsory payment of union dues. However, the surprising passing of Justice Scalia prior to the issuing of a decision in Friedrichs has left the court with only eight justices left to make a ruling.

By all indications, the Republican-controlled Senate will not confirm any appointment which President Obama attempts to make before the end of his term. If this happens, the Supreme Court has the power to simply issue a decision in Friedrichs with only eight justices. If the decision ends in a 4-4 tie, which is very likely given the ideological balance of the eight remaining justices, then the lower court’s decision would stand and become the law of the land. This would be incredibly good news for unions, because the lower court in Friedrichs, the 9th Circuit Court of Appeals, held that the practice of compelling union dues for full-fledged public employees remains constitutional pursuant to decades-old Supreme Court precedent. However, it is also possible that the Supreme Court could hold their decision for another argument once a new Justice is appointed. The stakes are at an all-time high for public unions across the country, so this is definitely one politically charged battle worth keeping an eye on.

The content of this blog is intended for informational purposes only and does not constitute or establish an attorney-client relationship, nor constitute legal advice. If you wish to discuss any further aspect of the material contained herein, please contact an Brent Eames at Eames Law Group, Ltd.